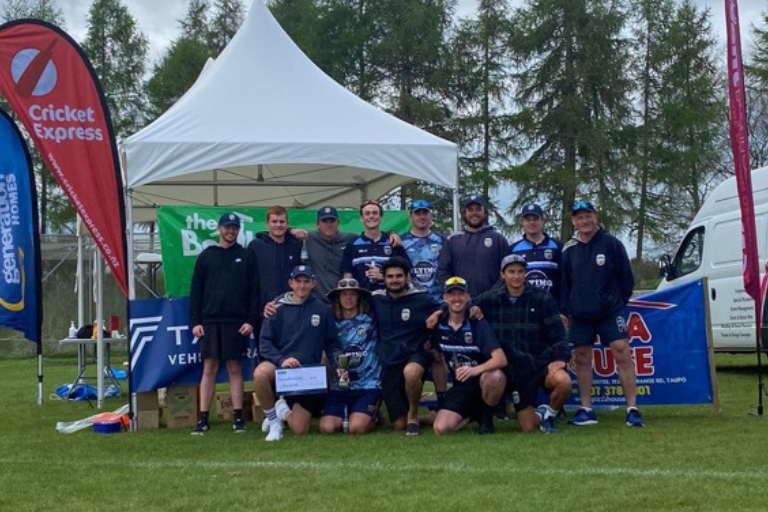 The season has kicked off in style with two T20 tournaments taking place over the weekend.

The Bayleys Central Indians proved to be too strong in the Chance Cars Geyser City Invitational played in Rototua, winning all four of their games and securing the win.

Round 1 was a dominant performance for the Craigs Investment Partners Geyser CC, winning by 8 wickets over Tauranga Boys College – Ben Dyson with the best bowling figures of 4 wickets for 3 runs…in only 2 overs.

The afternoon saw the Geyser CC fall prey to some great bowling from Eastern BOP with Ricky Barring snagging 4 wickets with an economy rate of 3.43. A quick 55 off 29 balls for Lovely Sandhu helped the Central Indians get across the line against Tauranga Boys College.

Tauranga Boys hit their stride on Sunday morning, chasing down Eastern Bay of Plenty’s score of 138 in 15.4 overs with only 2 wickets down, thanks to a great partnership between Aiden Green (57 off 46) and TJ Clarke (55 off 32). Stephen Nicholls and Daniel Ford blasted a quick 69 off 44 balls at the top of the order for the Central Indians as they comfortably chased down Geyer City in 13.5 overs, winning by 8 wickets.

Finals time saw Bayleys Central Indians go up against Tauranga Boys College for 1st and 2nd  and the Craigs Investment Partners Geyser City CC play Eastern BOP for 3rd and 4th.  Lokesh Gahlan top scored for the Central Indians with 54 not out with contributions from Viren Patel (21) and A Bennett (24). Tauranga Boys were unable to chase down the 161 total, falling short by 28 runs.

A brilliant 71 off 34 balls (a strike rate of over 200) from Goldendeep Brar helped Geyser City to a impressive total of 194/8 which Eastern BOP failed to chase down, despite a score of 68 from Harry Singh.

Down in Taupo, the Cricket Express Lake Taupo Spring Invitational was underway with defending champs Taradale Cricket Club losing the toss against the Element IMF Otumoetai Cadets and bowling first. Otumoetai never got going and a late partnership between Spencer Wills (23) and Liam Collett (22) wasn’t enough to post a competitive score. Taradale chased down the 98 needed in 13.4 overs with one wicket down.

Meanwhile, the Flying Mullet Te Puke side were going up against the Generation Homes Lake Taupo premier team. After losing 2 early wickets, Blair McKenzie put on a masterclass in batting for Te Puke, scoring 82 runs off 55 balls. The total of 161 proved too much for Lake Taupo to chase down, falling short by 22 runs.

Caleb Bate was on fire for Taupo in Round 2, blasting 88 of 45 balls (including 10 6’s) vs Taradale. Luke Kenworthy got his team off to a good start in the 2nd innings with 57 off 38 balls but a tight bowling effort from Taupo restricted Taradale to 148, 6 runs short of the total.

Tim Pringle shone in the Otumoetai vs Te Puke game, scoring 77 not out off 44 balls. Some solid contributions from Spencer Wills (22), Andrew Mascall (18) and Liam Collett (18) helped the Otumoetai Cadets post a competitive score of 163.

In similar fashion, Cameron Riley came out swinging for Te Puke, scoring 76 runs off 54 balls (scoring over a half their runs), but it wasn’t enough with Tim Pringle following on from his batting performance to take 4 wickets.

Day 2 Started with a mammoth win for the Generation Homes Lake Taupo team, winning by 100 runs over the Element IMF Otumoetai Cadets. AJ How and John Dolan both taking 3 wickets each for Lake Taupo and Michael Mitchell top scoring with 53 not out.

On the other ground, The Flying Mullet Te Puke side posted an impressive 201/4 score for Taradale to chase down. Blair McKenzie continued his form with 79 not out with Iman Singh joining him later in the innings for a quick 28 off 11 balls, at a strike rate of 255. The Te Puke bowlers shared the love with 5 of them coming away with 2 wickets each and restricting Taradale to 124.

It was The Flying Mullet Te Puke prems taking on the Generation Homes Lake Taupo prems in the final with Lake Taupo winning the toss and electing to bat. Caleb Bate rose to the occasion and posted an impressive 108 off 64 balls before being bowled by Hamish Wilde in the 18th over. In response, Ben Vyer smashed 6 sixes in his 59 and a fantastic 31 off 12 balls late in the innings by Josh Earle secured the win for Te Puke.

In the battle for 3rd and 4th, The Bayleys Taradale prems won the toss and decided to bat against the Element IMF Otumoetai Cadets. Taradale couldn’t get going with Steven Phillips top scoring with 41 off 55 balls and with 2 run outs late in the innings, only managed to post 124/5. The Otumoetai top order came out swinging, posting a partnership of 95 (James McCabe 43 and Spencer Wills 52). They chased down Taradale’s score in 16.4 overs.