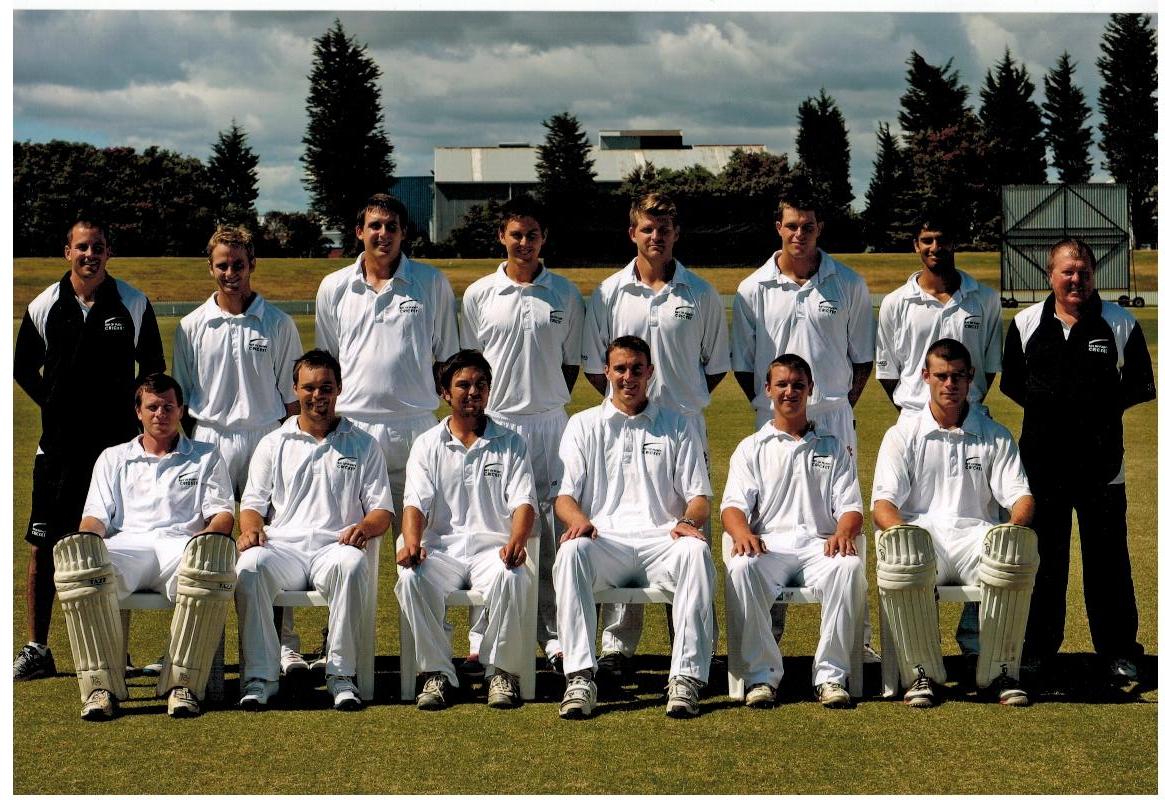 The current Bay of Plenty Cricket Baywide season has lost a little sparkle and colour without the appearance of Jono Boult on a regular basis. While Jono answered Element IMF Cadets call to duty against Mount Maunganui, in the Bay of Plenty Cup, his ongoing Baywide appearances are likely to be limited to fill-in duties, when Cadets are short of first-line troops.

In nearly twenty years of representative and premier club cricket, Jonathon James Boult brought something special to the game in the Bay of Plenty and beyond. Passionate, honorable, loyal, outspoken (when the moment needed comment) funny and hard working, are just a few of the words that could be used to describe Jono’s love and approach to the great game.

A newspaper club cricket report of March 2003 said "Albion batted first in their Baywide premier match with Otumoetai Cadets and were dismissed for a modest 137. The star of the Cadets bowling attack was Jono Boult who is usually better known for his efforts with the bat. The extremely promising seventeen-year-old took six of the last seven wickets to finish with the outstanding figures of 6/17".

The newspaper cricket report first shone the spotlight on Jono Boult - who would go on to the giddy heights of playing for a New Zealand XI against India, over one hundred NZC Major Association matches and achieve legendary status in Bay of Plenty Cricket representative sides.

Long-serving Bay of Plenty representative player Peter Drysdale played with Jono in Bay sides and in combat against him in Baywide Club cricket. "Jono's skills along with his intelligence on the cricket field form a rare combination and resulted in a truly brilliant cricketer. Jono always bought a tough edge to the Bay of Plenty Cricket team and had a knack of making life as difficult as possible for the opposition”. “His competitive nature drove him to perform and brought the best out of those around him. Jono has always been extremely generous in passing on his vast knowledge of the game to team mates. He has a knack of making the game so simple. Equally Jono had a great sense of humour regarding how complicated the game could become”.

“One match I will always remember, was Bay of Plenty turning around a first innings deficit to win outright against Manawatu in a Hawke Cup Challenge at the Bay Oval. Jono's leadership during that match was instrumental in building the belief of the group that we could do what we did, but also mapping out how we were going to do it. Just one example of Jono's outstanding captaincy of the Bay of Plenty Cricket team”.

“I have the utmost respect for Jono as a cricketer, team mate and competitor. He has contributed significantly to the legacy of Bay of Plenty Cricket during his playing days and still has plenty to offer on and off the field."

Steady  Bay of Plenty representative progress followed, the then batsmen who could bowl a bit, until his breakthrough minor association batting performances in the 2007/08 season. Jono smashed 428 runs in Fergus Hickey Rosebowl cricket and caught the eye of the ND selectors, with his first class debut against Auckland, in a State Championship match on the 6 March 2009.

During March 2013, the seasoned cricket professional earned selection for a New Zealand XI that played India, who were touring the country at the time. Included in the New Zealand side, were Black Caps or future Black Caps in Peter Fulton, George Worker, Anton Devcich and Tim Seifert. Jono 's contribution was eight runs of 20 balls that included two 4's and one wicket.

Jono's ND professional career stretched over eight seasons, to number a total of 106 games, in the Northern Districts strip.

Jono excelled in the NZC First Class game playing 21 matches, in which he smacked 508 runs with a highest score of 76, and took 39 wickets with best figures of 4/37. As he matured, his right hand off-breaks took centre stage with 51 One-Day bowling scalps and a best of eight wickets for 38 runs, accompanied by 396 runs with a top score of 51.

Boult made nearly half his appearances in NZC T20 Super Smash games, as a change bowler to break up partnerships and a handy lower order batsman.

Well-known New Zealand cricket identity James Pamment coached Jono in Northern Districts and Bay of Plenty teams over a considerable period. “Jono was an established member of the Bay of Plenty Senior Men’s Squad when I joined them, for my second stint as Coach, in 2006/07. He was a key player among a talented but somewhat underachieving group. Under the expert guidance of Captain Llorne Howell, over the next couple of seasons the team started to dominate NZC District Association Cricket and Jono was the heartbeat of that dominance, producing many match winning performances with both bat and ball”.

“He took the Captains responsibility after Llorne moved away and did equally a fine job of leading the Bay squad, as we started to introduce many promising young players. The fact that many of those youngsters have gone on and had excellent  careers for Bay of Plenty and many for ND, is testament to the faith that Jono showed in them”.

“Our respective careers, Jono’s playing and mine in coaching, followed very similar pathways for a decade, District Association, ND A Cricket and then on to the ND Knights first class squad. I have some wonderful memories not only from the wins, the titles that we won but of some great fun times with Bay of Plenty, ND A, especially the Lincoln trips over the New Year period and with the Knights Squad”.

“Jono was always a good team member and usually at the heart of the social committee. The undoubted highlight of my coaching career to date was taking the ND Knights squad to the Champions League in India in 2014. Jono played a massive part in achieving that opportunity with his performances for the ND T/20 squad. Jono didn’t play at the Tournament but I’ll never forget his positive influence over the spinners who did get the opportunity to play in India, his support & guidance of Ish Sodhi and Mitchell Santner spoke volumes of his character and commitment to the team”. “To take a group of ‘mainly’ ND born & bred lads to that stage was a special time for us all and I believe a great moment in time for many of that group who have gone on and represented our country with unprecedented success, including Jono’s brother, Trent.

“Jono Boult is one of the most tactically astute cricketers I’ve come across, he really knows the game and how it can move, occasionally his ‘out of the box’ thinking or theories were interesting to listen too, probably Howlers influence!!.  But I had no hesitation in providing an opportunity for him to Captain the ND squad during the Ford Trophy, when the appointed captain was away on international duty - he did a fine job”.

“Hopefully now the curtain has been drawn on a very successful playing career, Jono I’m sure will look back with fondness on his contributions to the team’s that he’s played for. I hope he continues to stay involved in the game, he’s got a lot to give, of that I have no doubt”.

Jono, would go on write his name in a prominent place in the Bay of Plenty Cricket all-time cricket milestones, since the first Bay of Plenty representative match in 1932. At the conclusion of his representative career in March 2018,  he sat in fourth place on representative appearances ladder (86) seventh in the batting stakes (2440) and fourth on the bowling list (155).

JJ Boult also stands head and shoulders above most of his contemporaries on the BOPCA Honours board. Boult is one of just ten Bay players to take ten wickets in a match, with his 6/32 and 4/37 against Poverty Bay in the 2011/12 season, which included one of his three six-wicket bags. He also earned a place on the centuries list with 107 runs against Poverty Bay in the 2010/11 cricket season.

However Jono greatest cricket love could be found at the Otumoetai Cadets Cricket Club at the Tauranga Domain. His prominent position of Cadets honours board, tell us that he posted seven Baywide Premier centuries with a top score of 200 not out, and five six-wicket bags, in a Cadets career that stretched nearly two decades.

Few that played alongside Jono, would him better than Campbell (Chopper) Wilson, who played with Jono at their beloved Cadets Cricket Club and in the Bay of Plenty representative team on numerous occasions. “I am very fortunate to have played many times with Jono for Cadets, Tauranga and Bay of Plenty. Jono was always hungry for success and wanted to be part of every game as much as he could”.

“His 200 not out verses the Mount was special to see firsthand. He developed into a quality all rounder over the years and always one of the first on the team sheet. He has a fantastic cricketing brain and this was evident in every team he captained”. “He has a larger than life character and is fiercely competitive - he just hated losing which is why he had so much success”.

“We used to make up various different all time Cadets teams after a few beers on Saturday nights at the Domain. He fully deserves to be included in the all time best Cadets eleven and is truly a legend of the club”.