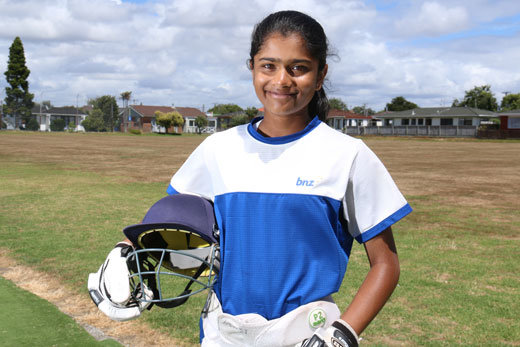 Right Arm Medium bowling became a thing of the past after Patel had undertaken a full ACL reconstruction. Patel worked alongside of Bay Of Plenty Coach, Russ Williams and the pair worked closely in an attempt to get Patel returning to the cricket field.

“Russ Williams who has been my coach since I was in year 6 has been the biggest hand behind all my success. We’ve gone through many ups and downs together and he’s helped me through it all. He supported my decision to change to spin after my ACL reconstruction and got me fully prepared for the start of the following season. I’m very grateful to have him in my corner.” Patel said.

After playing all 10 Matches for Northern Districts in the Hallyburton Johnstone Shield, Patel managed 236 runs with a high score of 71. With the ball in hand, Patel took a total of 18 wickets, securing her best bowling figures of 6 Wickets for 25 Runs.
This year Patel came away with the Nicola Brown Medal for Female Player Of The Year at the Northern Districts awards, as well as the Hallyburton Johnstone Shield for One Day Cricket Player of the Year. Catching the eye of New Zealand Cricket
General Manger Bryan Stronach, he states “Nensi Patel has shone at domestic level”.

“It’s been a childhood dream that one day I too would get to play for the country. Ever since I met the team back when I was in primary I’ve had this urge inside me that’s been pushing me to work harder and harder to make the dream become a reality. And being offered the contract is truly amazing and it’s motivating me to work harder than ever to become the best I can become.”


Patels’ aspirations of playing for her country has come a step closer for the Bay Of Plenty Cricketer.