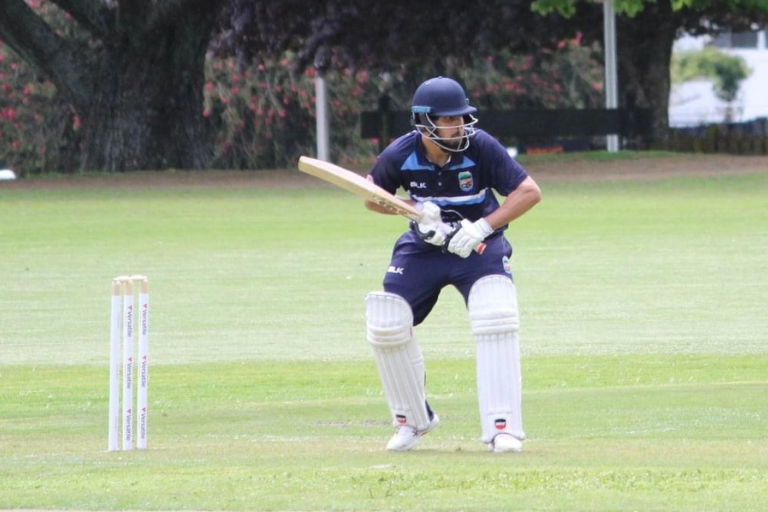 Dominant performances from the top of the table teams and some individual brilliance made for an exciting day of play in round 3 of the Bayleys Bay of Plenty Cup.

Pete Drysdale got off to a positive start for Bond & Co Mount Maunganui after they won the toss and elected to bat against a strong Eves Realty Greerton line up with a beautiful straight drive for 4 in the first over. It wasn’t fellow opener Ben Pomare’s day, spooning the ball to the man at cover in the 3rd over.

Niven Dovey was in next and quickly got into his work, forming a partnership of 146 (off 110 balls) with Drysdale. Drysdale fell victim to Hampton LBW in the 36th over – just one run shy of his half century. Dovey followed in the next over, run out on 90.

An 8th wicket partnership of 55 between Dale Sawn and Craig Baldry (with a rain delay towards the end of the innings) took their total to 259 from their 60 overs. Hampton the best of the Greerton bowlers with 4 wickets at an economy rate of 3.29.

Hoping to replicate the 85 run opening partnership they put on in Round 1, Tom MacRury and Jeet Raval started strong until MacRury was run out for 27. Raval carried on, bringing up a stylish half century before succumbing to the bowling of Dale Swan. Five Greerton batsman were unable to get off the mark and a fantastic 70 from Nick O’Sullivan wasn’t enough to chase down the total, losing by 78 runs.

The Element IMF Otumoetai Cadets also took advantage of the toss and had a bat first. What followed was an absolute batting masterclass with the top 3 batsmen contributing 271 runs. Fergus Lellman was the standout with 139 not out off 140 balls and was supported by both Marcel Collett (66) and Joe Carter (66). A late cameo from Andrew Mascall who scored 20 off 12 balls set an intimidating 316 target for Holland Beckett Law Tauranga Boys College to chase for the win.

It was a positive start for Tauranga Boys with Charles Williams making 52 runs from 46 balls before he was dismissed by the competition's top ranked bowler, Tim Pringle. Pringle then ripped through the Boys College line up, finishing up with 7 wickets at an economy rate of 1.52 securing the home side a 164 run win.

It was a low scoring affair in Rotorua, with the two local teams going head to head. The Bayleys Central Indians won the toss and put Craigs Investment Partners Geyser City in to bat. Andrew Gibbs shone with the ball for the Central Indians – taking 7 wickets in 10 overs for 34 runs. The Geyser City tail helped to get their team to a more respectable total with Gurtej Billing highest scoring on 21 not out.

The Central Indians weren’t mucking around chasing down the 91 runs needed to win. Opener Daniel Ford contributing a quick 20 off 10 balls before being run out in the 3rd over. Fellow opening Stephen Nicholls and Nadeera Nawela partnered up for 36 runs to help reach Geyser City’s score in the 14th over.

Papamoa played host to The Flying Mullet Te Puke side and put them in for a bat after winning the toss. What followed was a beautiful batting showcase from opener Iman Singh, scoring 117 off 136 balls. A 5th wicket partnership of 81 from Gareth Wallace (58 not out) and Stephen Crossan (53 not out) set Papamoa an intimidating 285 to chase down after declaring after 55 overs.

A impressive 82 from Nikhil Vishwanath and contributions from Jass Randhawa (31), Edward Sclater (16) and Ashish Dhameliya (11) wasn’t enough to get close to Te Pukes total – the game finishing with Te Puke taking out the first innings win.