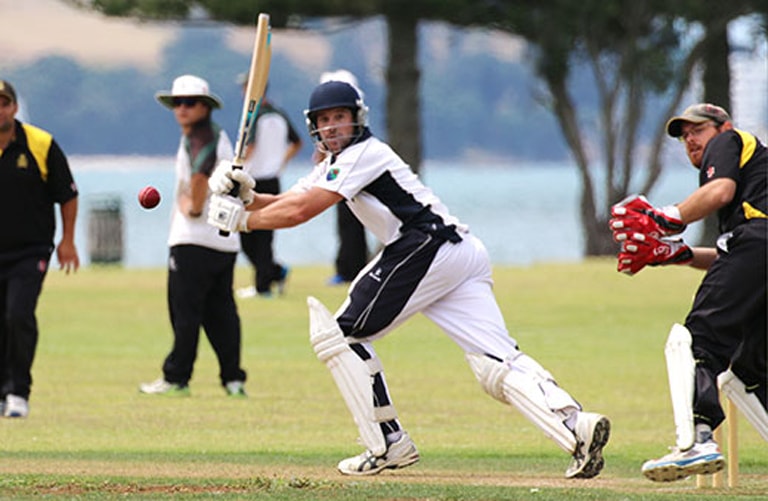 A Bay of Plenty century and a six wicket bag, weren’t quite enough to retain the Howell Family Trophy, in the deciding match against Hawkes Bay played at the Tauranga Domain on Sunday (27 October 2017).

The two sides entered the fifty over per side title decider with a win apiece in Twenty 20 action on day one. Bay of Plenty won the toss on day two and elected to bat, setting Hawkes Bay a substantial target, when they posted 280 for the loss of nine wickets.

ND batsman Joe Carter came in at four when the hosts were 48/2 and proceeded to pick his shots, in partnership with fellow Northern Districts player Bharat Popli, as they put on a 132 run stand.

Popli was the first to be dismissed when he fell with 83 runs to his name. Carter continued on, before he was caught by Angus Schaw off the bowling of Bradley Schmulian for 128, with four balls remaining in his sides turn at bat. Angus Schaw was the best of the Hawkes Bay bowlers with four wickets for 53 runs.

Hawkes Bay lost their first wicket for just three runs but worked their way back into contention. When Hawkes Bay were at 226/9, the ascendancy was well and truly in Bay of Plenty’s favour. However Dominic Thompson and Ben Stoyanoff, defied all that the opposition bowlers could throw at them, to take them through to a one wicket win with just two balls to spare.

Thompson was defiance personified at one end, smacking an unbeaten 109 off 91 balls in an innings that contained six 4’s and four 6’s, with Stoyanoff posting a hugely valuable seven runs. Cameron Riley grabbed a six wicket bag returning figures of 6/83.

The Howell Family Trophy will now reside in the “Other Bay” during the winter break, until the two provinces go into battle again in twelve months time.

Hawkes Bay comprehensively won the first of the two Twenty 20 games against the Bay of Plenty XI played at the Tauranga Domain on Saturday.

Batting first the visitors posted an impressive 189/8. Matt Edmonson and Dominic Thompson, batting at three and four, did the damage with both reaching the sixties before being dismissed. Wily Bay of Plenty spin bowler Peter Drysdale, who was the home sides second change, weaved some magic taking four wickets at a cost of 29 runs.

Bay of Plenty failed to bat their overs out, being dismissed for just 118, with 24 balls remaining in their turn at bat. The damage was done in the middle of the home sides innings, with three wickets falling for just six runs.

The afternoon encounter was a thriller, with Bay of Plenty evening the score and taking the Howell Family Trophy into a day two decider.

Bay of Plenty showed a lot more authority in the afternoon encounter, after they posted 182/8. Joe Carter and Peter Drysdale put on an 80 run opening stand before Carter was removed for 32 runs. Drysdale continued on to be rewarded with a half century. Batting at five Bharat Popli anchored the Bay of Plenty innings belting 55 off 30 balls, with Dan Price chipping in with 21 runs.

Hawkes Bay were on the required run rate from the start. Matt Edmonson again led the way to top score with 62, with Angus Schaw and Dominic Thompson both posting handy contributions. The game was in the balance entering the final over, with Hawkes Bay falling two runs short as they were restricted to 180/5, to hand Bay of Plenty a paper-thin margin win.