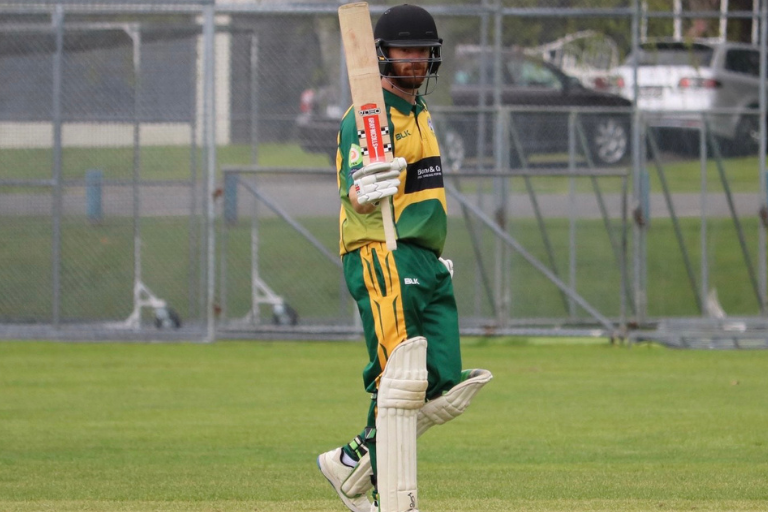 Round 1 of the Bayley's Bay of Plenty Cup offered up some big hits and spectacular bowling in what is shaping up to be a tight competition.

The run chase didn't get off to the best of starts as Lake Taupo were 4/17 after 8 overs.  A 55 run partnership Between Habib Malik (51) and Aditya Chandel (24) somewhat steadied the ship but the wicket of Chandel caught on the boundary opened the door again. Steady wickets fell at the other end meanwhile Malik composed a very well made 50 but didn't last too long after. AJ How chipped in with 26 but there was too much to do with very little wickets left behind, falling 52 runs short.

Flying Mullet Te Puke vs Eves Realty Greerton
Winning the toss and deciding to bowl, the Flying Mullet Te Puke CC we witness to an opening partnership of 85 runs by Tom MacRury (58) and Jeet Raval (92).
Jeet Raval, on debut, did what he does best, batting long and anchoring the innings for a well composed 92 from 105. Tom Renoulf (50th match) did the damage at the end to get the team up to a very good score of 273, hitting 53 not out.

Jared Tutty and Brett Hampton opened the bowling for Greerton and bowled incredibly tight, restricting Te Puke to 20-2 after 14 overs. a solid 68 from Te Puke captain, Blair McKenzie, and a 6th wicket partnership of 72 between Stephen Crossan (60) and Josh Earle (18) wasn't enough with Greerton taking out a winning draw with max bowling and batting points with Te Puke getting to 203-9 off 56 overs.

Following on from his outstanding bowling performance in the first innings (4-22), Tim Pringle accumulated over half of the runs required for the Cadets with 78 not out off 74 balls as they comfortably chased down Geyser City's total in the 29th over.

The run chase got off to a great start with the opening batsmen contributing 62 runs. However, the Mount bowlers were on fire and a 10th wicket partnership between Riley Brady (36) and Troy Barnett (13 not out) couldn't get Tauranga Boys over the line, falling 63 runs short.