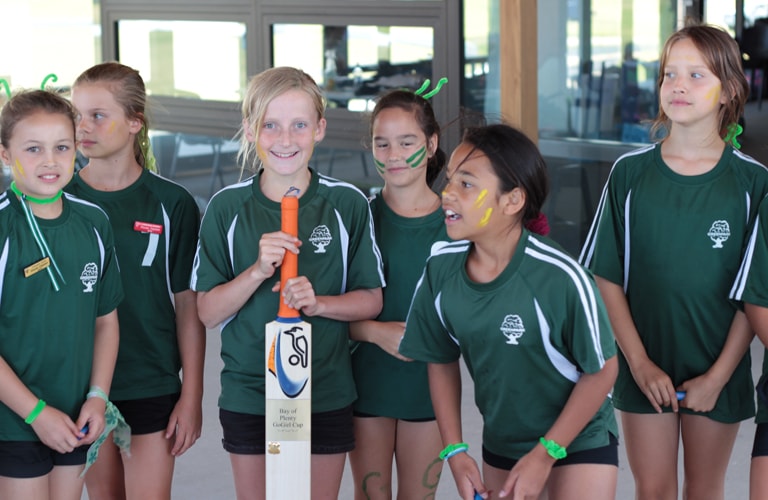 Western Bay of Plenty GoGirl Program Kicks Off on Monday

A introductory Girls Cricket program, that was delivered to over 600 Year 4 – 6  participants throughout the Bay of Plenty last season, kicks off again on Monday 21st October 2019, with the GoGirl program being delivered in 20 Western Bay schools.

The GoGirl program will be presented in the Western Bay of Plenty in both Term four and Term one of 2020, with the girls cricket curriculum being expanded to the Rotorua and Taupo regions in Term one next year.

The overriding goal of GoGirls is to provide a positive cricket experience for young females. “We would love the girls to join a cricketing pathway, but we hope that they continue to love the sport in any way, be that as a player or a fan of the game”. “Last season half of our Girls Under 14 players had taken part in GoGirl program’s and continued their cricket careers at a higher level” said BOPCA Women’s Cricket Officer Rebecca Yee.

The BOPCA GoGirl program, delivers four weekly coaching sessions to each school that participates in the program, through a combination of the fundamental motor and cricket skills.

In the Western Bay of Plenty, GoGirls is the second step in the BOPCA Girls pathway, after the primary schools cricket awareness program delivered by Bay of Plenty Cricket. “In the Western Bay, GoGirls runs alongside the NPL GO, which gives the youngsters an option to play outside of school, with an opportunity to move on to the JNPL (Junior Northern Premier League) competition”, said Rebecca.

“Each of the Western Bay options are avenues to representative cricket and we are currently working on developing our girl’s only programs, in the other Bay of Plenty sub-associations”.

Each GoGirl program concludes with a highly popular Girls Festival Days, where the participants take their newly learned skills into a fun day of cricket activity

There is huge excitement building towards the Western Bay Super 6’s festival day on the 21st November 2019. The GoGirl cricket day, is taking place on the adjacent Blake Park rugby fields, to the opening day of the historic Black Caps verses England at the Bay Oval,

Rotorua and Taupo Year 4-6 girls will have their day in the (cricket) sun, with the BOPCA Girls Cricket Festivals coming to Boord and Owen Delany Parks, at the culmination of their regional GoGirl programs in March 2020.