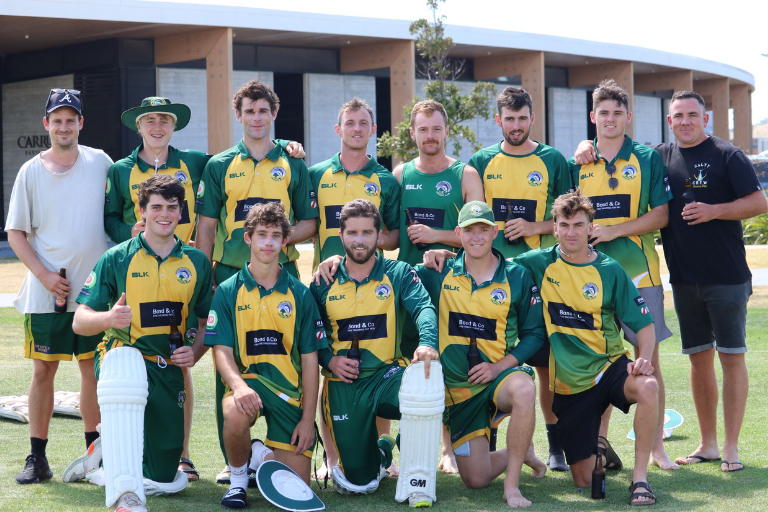 Bond & Co Mount Maunganui have won the Bayleys Bay of Plenty cup in style….and with one round to spare.

The Mount played host to Craigs Investment Partners Geyser City who won the toss and decided to have a bat. It didn’t take long for the Rotorua team to regret their decision with opener Vinay Pathania out on the first ball of the match. Jasvinder Singh fell not long after and Geyser found themselves 7 wickets down with 66 runs on the board. Goldendeep Brar helped his team to 87 all out with a high score of 27.

Ben Pomare came out swinging with 24 runs off 8 balls and with contributions from Drysdale (14*) Dovey (28) and Crombie (18*) the dominant Mount Maunganui side waltzed to their 20th win in a row.

Mount captain, Ben Musgrave, couldn’t be happier with how his side handled themselves throughout the competition.

“It was a really good campaign from this squad of players we have. We had guys such as Pete Drysdale and Craig Baldry step up and put some really good numbers on the board but I think it's a credit to the depth we have here at the Mount. There were lots of injuries in this campaign and those guys coming into the side really stepped up and made an impact. It definitely made my job pretty easy”

Eyeing up 2nd place, the Element IMF Otumoetai Cadets played the winless Generation Homes Lake Taupo premiers. Lake Taupo started strong with 9 runs off the first over and when Michael Mitchell and Habib Malik came together to form a 62 run partnership, Taupo was looking good on 114-2. Contributions from the lower order set the Cadets a competitive score of 220 to chase down.

Top ranked opening batsman, Fergus Lellman got out cheaply for 6 in the 3rd over but Otumoetai bat deep and 57 from Tim Pringle, 55 not out from Andrew Mascall and 42 from Mayura Galappaththi helped their team win by 5 wickets in the 48th over.

Pemberton Park was the place to be if you were a Eves Realty Greerton supporter with the yellow and blacks scoring 192 runs with Nick O’Sullivan top scoring with 33. Michael Brown snagged 4 wickets for Papamoa in a good bowling performance all round.

Losing a wicket in the first over and another in the 2nd, Papamoa was in trouble at 5-2 and despite Ryan d’Abo scoring a boundary laden 42, they could only manage 160 before being bowled out in the 27th over.

After an impressive win last round, Holland Beckett Law Tauranga Boys College were looking to produce another good performance when they came up against The Flying Mullet Te Puke prems. Te Puke won the toss and at 63 for 2 in the 22nd over the game was evenly poised. A 131 run 4th wicket  partnership between Blair McKenzie and Gareth Wallace put them in the box seat with 254 amassed in their 60 overs.

Tauranga Boys opener, Charles Williams wasn’t mucking around as he scored a quick fire 43 off 29 balls. Wickets then fell consistently throughout the innings and 3 quick wickets by Ben Roborgh in the 39th over meant they were all out for 156.

The last round of the Bayleys Bay of Plenty Cup will be played on the 18th December with the Bond & Co Mount Maunganui Prems sitting it out due to a bye.