Bay of Plenty Coastland lifted aloft the Alan Whimp Trophy in triumph, at the end of the ND Senior Secondary cricket tournament played in Gisborne 10th – 14th December 2018, after annexing the ND age-group title for the sixth time since 2004.

Bay of Plenty cricket followers wouldn’t have been surprised at the Bay side’s success under the guidance of long-time team coach Peter Swan – however a few eyebrows would have been raised with the total dominance of the ND title decider against arch-rivals Hamilton.

Coastlands entered the ND Championship tournament final seeking revenge, after suffering the only loss of five days of continuous cricket, against the Waikato City team in the Twenty 20 final on day two.

The first mistake made by Hamilton was in electing to bat after winning the toss. Cam Riley struck quickly to take three top order wickets, which was further compounded by a run out orchestrated by Taylor Bettelheim, to have the opposition innings in tatters. Jacob Logan grabbed two wickets, as the vaunted Hamilton batting attack was removed for 80. 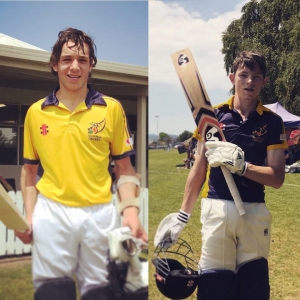 A walk in the park best describes the Coastland charge for championship honours, with the ten-wicket win coming with the fourth ball of the 13th over. Jacob Logan walked off with an unbeaten 49 runs in the book, with Taylor Bettelheim posting 19 not out.

Bay of Plenty Lakeland could also hold their heads high with some good performances during the tournament. While the side drawn from the Eastern Bay, Rotorua and Taupo regions, were blitzed by Waikato Valley in the Plate Final,  the team really stepped up to the plate on all but a couple of occasions.

Bay of Plenty Cricket convener of selectors Tai Bridgman-Raison said “While it is nice to win age group trophies, the focus is very much on the long term development of players which is a philosophy that the selectors, coaches and management totally buy into.”

The two standout performances from the Bay of Plenty players was the century belted by Taylor Bettelheim and a six wicket bag picked up by Tommaso Pini.

Taylor Bettelheim was in the hot seat opening the Coastland batting.  On day four he led his side to a massive 299 for four wickets, as the Bay team demolished Counties Manukau by 118 runs, in their championship semi-final. Taylor smashed 131 off 157 balls, in a knock that contained eleven 4’s.

On the same day, Lakeland bowler Tommaso Pini wrecked the Poverty Bay innings as the home side were bundled out for just 68. Tommaso weaved magic with the ball in taking six wickets for just 11 runs.