The ND Junior Secondary cricket tournament wrapped up in Rotorua in sunshine on Friday 7 December 2018, after the first four days were dogged by rain.

There were a number of highlights during the three days where play was possible. Bay of Plenty Coastland took out the Twenty 20 title, which follows the championship silverware that they won in Whangarei two years ago. 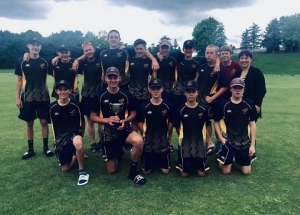 Bay of Plenty Coastland batted first in the ND Junior Secondary T20 title decider on day four and posted 133 for the loss of four wickets, with Ben Vyver top scoring with a hard fought 64 runs. Led by four wickets for just 19 runs from Isaac White, the Coastland bowlers took control of the encounter to dismiss their long-time rivals for 88 to claim the ND Twenty 20 championship.

The Bay of Plenty Lakeland representatives produced a win and a loss, in the two games of T20 pool play that was possible, to reach the playoff for third place. Northland batted first and set the Bay side a very big target reaching 198 for the loss of just two wickets. Ethan Forbes performance with the bat shone like a beacon, top scoring with 59 runs, as the Lakeland team were restricted to 105/8.

Both Bay sides finished their tournament with a bang, in the stand alone fifty overs per side games, to finish with a victory apiece. Bay of Plenty Coastland sent the ND Invitation eleven into bat and bowed them out for 122. Toby Taylor took three wickets for 23 runs. Dandre du Plessis anchored the Bay sides four wicket win with 54 runs.

Day Five (7 December) – Fifty over per side

Pool A – Round One

Pool B – Round One

Day Two (4 December) – no play due to wet weather

Day One (3 December) – no play due to wet weather